Pinault collection leaves Venice to spend the summer in Monaco

ArtLovers at Grimaldi Forum from July 12 till September 7, 2014

ArtLovers opened on July 12 and will remain at the Space Ravel of the Grimaldi Forum in Monaco until September 7, exhibiting forty superb works of art from the incredible Pinault Collection, including fifteen never exposed outside their permanent home in Palazzo Grassi-Punta della Dogna in Venice. Francois Pinault acquired the prestigious Palazzo Grassi in 2005, and two years later he was selected by the City of Venice to undertake the transformation of Punta della Dogana into a new center for contemporary art to exhibit works from his collection. The collection has travelled to Moscow, Seoul, Dunkerke, Paris and it is today in the Principality. Martin Bethenod the exhibition curator who is the Director of the Pinault collection since June 2010, together with the talented art choreographer Frederic Casanova from Atelier FCS gave the members of the press a private tour before the inauguration. Bethenod explained the theme of this breathtaking display in terms of intertextuality, from quotation to allusion, from reference to parody, from homage to critic, from diversion to reuse, from transposition to remake. ArtLovers proposes the public to discover the unique inspiration process of creativity, transformation and production of forms and ideas generated by the interrelationship among the works of arts themselves. The giant skull by Indian artist Subodh Gupta entitled Very Hungry God guards the entrance to the Grimaldi Forum as sample of what awaits inside.

The exhibition was choreographed marvelously in six sections that connect with one another in a continuous and spirited flow. Jeff Koons Hanging Heart (Red/Gold) opens the show, to lead us to the first part dealing with art history from Antiquity to the present as an allusion to the sculpture galleries of the classic museums. It all unfolds with the smallest piece of Giulio Paolini L’Invenzione di Ingress (1968) a self-portrait where the artist and subject is one and the same person. By superimposing the self-portrait by Raphael from 1504 and a version of it done by Ingres, he created a sort of shaking effect between the two and thus a new piece was born. The ten skillful art pieces in this area provide a succinct overview of the history of sculpture going from Antiquity with Light from the Left of Charles Ray or the Mimesi (Venus split image) of Giulio Paolini. Followed by the Renaissance with the Untitled (Giambologna) of Urs Fischer, a replica of The Rape of the Sabine Women done in wax, a giant candle that will be melting away all along the exhibition. The baroque sculpture All by Cattelan; the neoclassic elicited by Jeff Koons; the modern sculpture with artist Henry Moore, invoked by Paul McCarthy; last but not least the contemporary carving of Rachel Whiteread with Untitled (100 spaces) that repeats and multiplies by 100 the mythical molding of Space under my Chair of Bruce Nauman. This gallery, that puts in perspective the different types and periods, closes with a piece that plays with irony Untitled (Dancing Nazis) of Piotr Uklanski, in a Saturday Night Fever disco ambiance, that really invites the visitors to join in and dance becoming active part of the work of art! 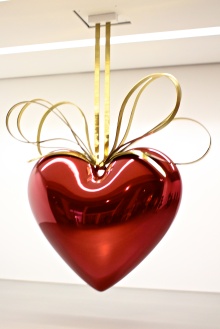 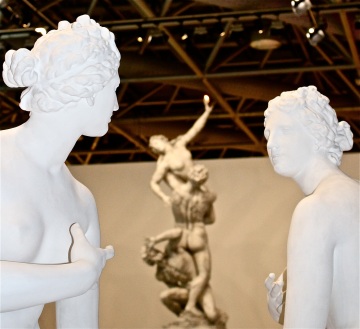 The art pieces in the second gallery are focused on the idea of conversion as a process of metamorphosis and ultimately creation. Process of transfer within time with Takashi Murakami and his polyptych 772-272 The Emergence of God At The Reversal of Fate exposed for the first time outside Palazzo Grassi for which it was created. Transfer of a medium into another one with Louise Lawler, who moves the little Degas dancer, reduced to two dimensions, from sculpture to photography. The interplay of transposition from a medium to another, from a period into another one, from a culture into another one, responds like a mirror to the process that is exactly the opposite of imitation. Instead of the artist taking possession of an existent subject to carry it into his own world, he or she attaches the universe of another artist, to treat a subject that specifically belongs to him or her. That is very well illustrated by the two pieces of Damien Hirst, “in the way” of Francis Bacon: the triptych entitled Insomnia and Turn Away from Me. 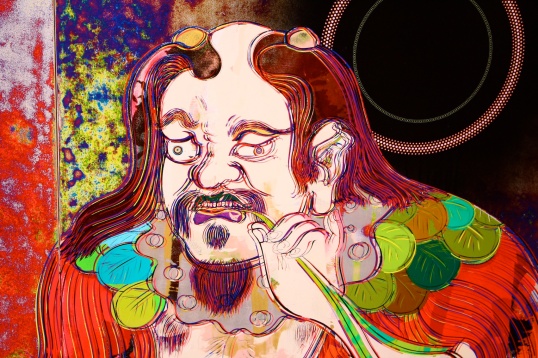 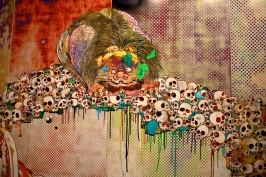 The third section redefines the iconography of saints in Matthew, Mark, Luke and John incorporated by Damien Hirst in the crude image of bulls. Hiroshi Sugimoto elicits The Last Supper of Leonardo da Vinci in an enormous photograph that is the image of the image of an image! The diptych Likeness I & II by Marlene Dumas from South Africa is based on the famous German artist Hans Holbein the Younger (1497-1543) painting The Body of the Dead Christ in the Tomb. Dumas puts together two similar images of different origins, one from Holbein and a paparazzi image on the other side, and the subject Christ Dead and Michael Jackson sleeping in his oxygen chamber to beat mortality.

In the fourth section of the exposition, it is an artist that another one summons and makes it comes alive to show it to us. French artist Bertrand Lavier when painting an object, he will recover it with paint with what he calls his “Van Gogh touch” like in Gabriel Gaveau (1981) displayed here, an object that can still be utilized. Under the same thematic we find the recognizable statue of Picasso Untitled of Maruzio Cattelan, or We from the same artist evoking Gilbert and George who at the same time honor Federico Garcia Lorca, but also Alighiero & Boetti and also themselves. 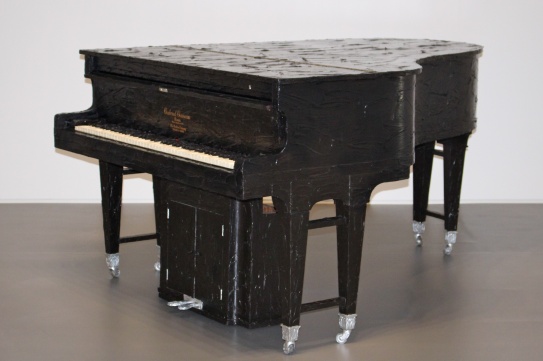 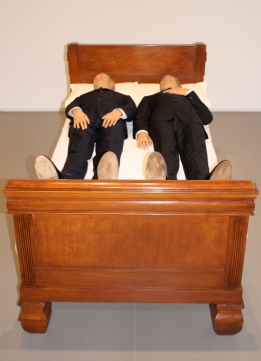 In the fifth gallery we leave evocation of existing works of art, to approach the field of their reutilization. The idea is to use the same material, to take possession of the object to reshape it and make a new work of art. This practice has its origin in the Palimpsests – manuscripts written over parchment paper already used and where we erase the previous inscriptions to rewrite a new one. We think of the American Robert Rauschenberg, who anticipated the pop art movement, and created Erased de Kooning Drawing, by effacing a design of the famous American artist Willem de Kooning, as an artistic statement. The Chapman brothers recover a series of prints of Caprices of Goya with their own designs in Like a Dog Returns to its Vomit where the pictures are hang on the wall in the figure of a dog. This practice is also used in film and consists in cutting, accelerating or slowing down the movie, like that of Douglas Gordon who installs two projections of an extract of Taxi Driver de Scorsese facing each other entitled Through a Looking Glass, creating an echo due to the delay from one another. 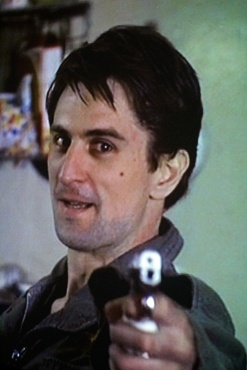 The last section is dedicated to appropriation, the deliberate reworking of images and styles from earlier well-known works of art, what we know as remake. The hallmark of postmodernism has turned out to be appropriation. We can admire Sherrie Levine with the series After August Sander, who re-photographs the photos of idols of photography history; and Sturtevant with two outstanding pieces, one Flower after Andy Warhol, and Untitled, Felix Gonzalez Torres America America, after Gonzalez Torres that is the last artwork of this fantastic art itinerary. 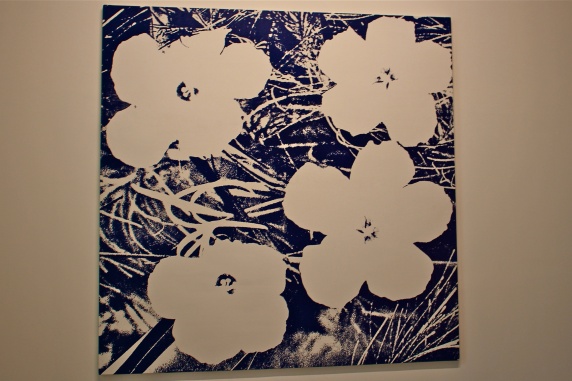 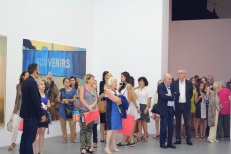 Intertextuality is the shaping of a text’s meaning by another text. The term having been conceived by poststructuralist Julia Kristeva in 1966, referring to allusion and influence. Graham Allen in 2000 explained it very well: “Intertextuality seems such a useful term because it foregrounds notions of relationality, interconnectedness and interdependence in modern cultural life. In the Postmodern epoch, theorists often claim, it is not possible any longer to speak of originality or the uniqueness of the artistic object, be it a painting or novel, since every artistic object is so clearly assembled from bits and pieces of already existent art.” To put it simply we define creativity saying that an idea is a combination of other ideas.

For added clarity I would like to cite this passage from the Bible: Ecclesiastes (Meaningless) 1:9-10 (NIV)

Hot of the press. The official inauguration of ArtLovers took place on Tuesday, July 15 in the presence of Francois Pinault himself and HSH Prince Albert who had returned from celebrating Bastille Day in Paris invited by President Hollande. Around 1500 privileged guests were invited to visit the exhibition following the Prince’s steps and a reduced group continued the evening festivities at the Monte-Carlo Beach Hotel with a dinner around the pool. 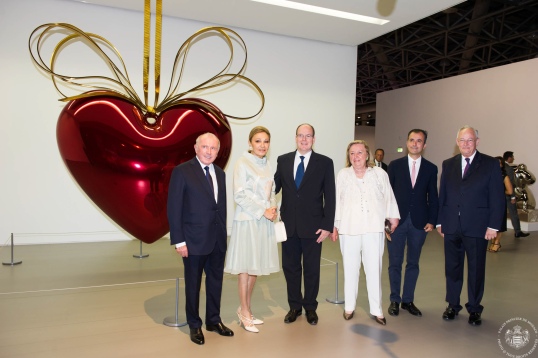 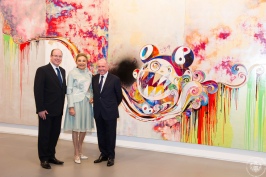 Dear reader, I highly recommend you visit this exhibition to witness the dynamic interplay among all the pieces carefully displayed, the different artists’ viewpoint and their relationship to others before them. And most importantly as an spectator you are invited to become an active participant in what I would call art in the making, all together for the love of art as universal expression.