Celebrating the Year of the Goat with firecrackers & dancing dragons

The Chinese Lunar New Year of the Goat (Sheep and Ram), the eight sign in the 12 cycles of their Zodiac, is being celebrated in China and other parts of the world, so on Thursday, February 19, 2015, the Oceanographic Museum in Monaco organised a colourful party to honor the most populous country in the world. Firecrackers exploded and dragons danced during the festivities. The Goat is a Yin energy, a symbol of Peace, Harmonious co-existence and Tranquility. The Goat is the symbol of the Arts. It relates to passive and nurturing times. For those who trust in goodness, happiness and success will follow.

The Museum is really like a chameleon with the ability to transform itself according to each event or exhibition, and people felt transported to that faraway mystical land, such was the ambiance recreated for the occasion. Furthermore, guests had the chance to enjoy the behind-the-scenes of the formidable exhibition On Sharks &amp; Humanity, with 11 works of art created specifically for the Museum by 10 contemporary talented Chinese artists. There is still time to visit the exposition until March 8, 2015, don’t miss it!

Guests at the Chinese New Year celebration at the Oceanographic Museum @M.Dagnino

Chinese New Year characters passing through the artwork THE NET by Wang Lyan at the Oceanographic Museum @M. Dagnino

On Sharks & Humanity moving to Moscow

After a period of 9 months and being viewed by almost half a million visitors, the exhibition “On Sharks and Humanity”, orchestrated by Parkview Arts Action in collaboration with NGO Wild Aid, will be leaving the Oceanographic Museum to be installed at the Ekaterina Cultural Foundation Moscow, opening to the public on May 28, 2015. From there the exhibition will be returning to Bejing for the final showdown at the National Museum of China. Each one of the unique works, in this colossal installation, summon the visitors to look beyond prejudices, and question our complicated relationship with sharks and by extension with nature.

The non-for profit Ekaterina Cultural Foundation was established in 2002, and has been engaged in organizing exhibitions, publishing, collecting works by contemporary artist, and supporting cultural and educational projects. Since its inception the Foundation collaborates with state museums, art centers and other non-for profit institutions both in and outside Russia.

The exhibition On Sharks & Humanity emphasizes through an artistic interpretation the important role sharks have in the regulation of the marine ecosystems, thus the negative impact of overfishing.

“Sharks are all the way at the top of the ocean’s food chain. They play a vital, regulatory role. They eat sick animals and keep our oceans healthy. If sharks were to disappear, the balance of marine life would come under threat and our seas would gradually fill up with algae and jellyfish,” added Robert Calcagno.

Meet the Chinese artists and their works

On Sharks & Humanity brings together original works by 10 contemporary Chinese artists, each of them expressing in their own particular way, the tense relationship of humans and sharks. Individually and together they draw attention to the many different aspects of his urgent environmental issue that matters to us all. Shark preservation is undoubtedly critical and their decline poses a fundamental threat to the health of the world’s oceans. 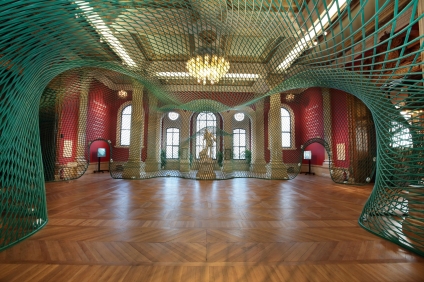 The Net by Wang Luyan. Exposition On Sharks and Humanity @T.Ameller

Poem by Fan Xueyi. Exposition On Sharks and Humanity @T.Ameller

Tsunami by Li Hui. Exposition On Sharks and Humanity @T.Ameller

Butterfly in Love with a Flower by Zheng Lu. Exposition On Sharks and Humanity @T.Ameller

Swimming by Zou Liang. Exposition On Sharks and Humanity @T.Ameller

Poseidon by Xia Hang. Exposition On Sharks and Humanity @T.Ameller 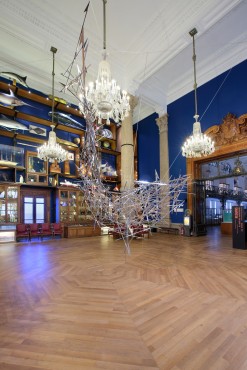 Enlightenment by Yu Yang. Exposition On Sharks and Humanity @T.Ameller

Evolution by Gao Xiaowu. Exposition On Sharks and Humanity @T.Ameller

Wang Luyan is one of China’s leading conceptual artists. The Net is an installation of Stainless Steel measuring 2100 x 2000 x 500cm, and weighing 15,000 Kg – Representing the drag net commonly used in fishing. Invites the visitor to move through the installation experiencing the net from the viewpoint of a shark or other sea life caught within it, becoming the captive.

Weng Fen is an active contemporary performance artist since 1997. He continues to create works relating to man, nature and urbanisation. The Body and the Sharks is a Film of 6 min, 40 seconds – Depicting the artist in a 10m3 water tank with two sharks evoking tension and vulnerability between man and shark.

Fan Xueyi was born in the Heilongjian Province, she is a poet, painter and gallery art director who  published her collection of poetry Childhood River. Her work for this exhibition is a poem entitled  I am Part of You, 2014.

Li Hui, born in Beijing the artist explores the physical properties of materials and the relationship between material and form. His sculpture is entitled Tsunami Sharks, measuring 200 x 100 x240(h) cm, of mirror finished stainless steel and resin. It symbolizes the power of the tsunami, and wrath of nature are explored through the sense of fragmentation and destructive energy that emanates from this sculpture. A harpoon pierces the mirrored surface, illustrating humanity’s destructive power. The visitor is confronted with his own image forcing us to question our desire to dominate nature.

Zheng Lu, born in Chi Feng, Inner Mongolia is an sculptor who belongs to the generation of young Chinese artists that witnessed the rapid economic, social and cultural changes in China. His sculpture The Butterfly in Love with the Flower, measuring 652 x 206 x 410 (h) cm, is made of Stainless Steel. Large stainless steel depiction of a shark fin characterised by its delicate bubble-like structure. The title refers to a Chinese poem in which a butterfly falls in love with a flower about to disappear.

Zou Liang – His sculptures frequently attempt to explore the existential conditions of life. Swimming, measuring 366 x 162 x 245(h) cm, made of stainless steel is a sculpture of a great white shark providing a positive contrast to other works with steel silhouettes of ocean creatures form the structure of the shark. On its back the figures of two small children illustrating that sharks are not a humans’ natural enemies.

Xia Hang – His works made of polished stainless steel can be assembled and disassembled, exploring multiple configurations. Poseidon was made in stainless steel measuring 380 x 175 x 192cm. In this sculpture the shark is portrayed as a war ship, but a sense of transience is evoked as the different elements can be reassembled in a different form.

Yu Yang – His artistic practice straddles both art and design combining traditional Chinese references with contemporary themes. Enlightenment is made of coloured Stainless Steel, measuring 340 x 250 x 380cm, composed of fishing harpoons used in the capture and killing of sharks, describing the animal form and its destruction.

Gao Xiaowu – This artist’s sculptures often explore the new challenges faced by ordinary people in contemporary Chinese cities through humor and satire. Evolution is a sculpture in Stainless Steel, measuring 328 x 183 x 179 (h) cm, depicting n of a shark transformed into an extravagant ornamental goldfish illustrating the human tendency to work against nature.