Sunday, May 10, 2015 another historic date for the Principality

Yesterday, on a sunny and tranquil Sunday morning Prince Albert and Princess Charlene celebrated the catholic Baptism of their five-month-old twins (b. December 10, 2014) at the Cathedral in Monaco beautifully decorated with 6000 white flowers. The ceremony was officiated by Monseigneur Bernard Barci, Archbishop of the Principality, assisted by Archbishop Luigi Travaglino, Papal Envoy to Monaco, who read a letter from Pope Francisco, expressing his apostolic benediction to hereditary prince Jacques and princess Gabriella, and their family. The ceremony lasted an hour and a half including songs by the Little Singers of Monaco and the Choir of the Monaco Cathedral. 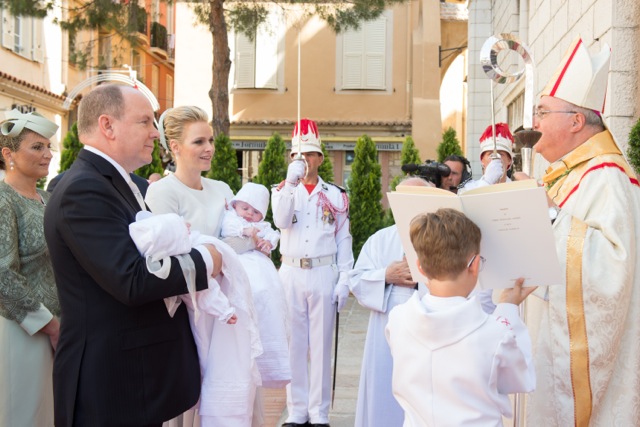 Prince Albert and Princess Charlene with their children at the entrance of the Cathedral meet Monseigneur Bernard Barci, May 10, 2015 @Michel Danino

The little royal twins Jacques Honore Rainier Grimaldi and sister Gabriella Therese Marie look divine and were very calm during the whole ceremony, without shading a single tear from their beautiful blue eyes. Princess Charlene was holding a wide-awake Prince Jacques, while Prince Albert had Princess Gabriella, dozing in his protecting arms, until she also got awake for the ceremony, both babies becoming active part of this historic event in their young lives. You could even see them playing with each other when they were in the arm of their nannies while their parents signed the baptism registry.

Hereditary Prince Jacques Godparents are Diane Veronica Therese de Polignac de Barros Nigra (grand daughter of Therese de Polignac, niece of Pierre de Polignac, cousin of Rainier III) and Christopher Lee Vine Jr. (son of Prince Albert’s cousin), both cousins of Prince Albert II. Princess Gabriella has two South Africans as Godparents: Nerine Pienaar (married to the former South African rugby player Francoi Pienaar) and Gareth Wittstock, his uncle and older brother of Princess Charlene. The Grimaldi family were sitting on the pews represented by: Princess Stephanie and her children Pauline, Camille and Louis; Princess Caroline with Andrea, Pierre and Princess Alexandra of Hannover, but noticing the absence of Charlotte Casiraghi. Sitting on first row were the cousins of Prince Albert and on the other side Charlene family.   Among the 700 distinguished guests present during the ceremony were members of the Monaco Government and sports figures. The habitants of the Principality gathered in the Palace Square in a festive ambiance watching the ceremony on giant screens, while people around the world watched the direct transmission on television. 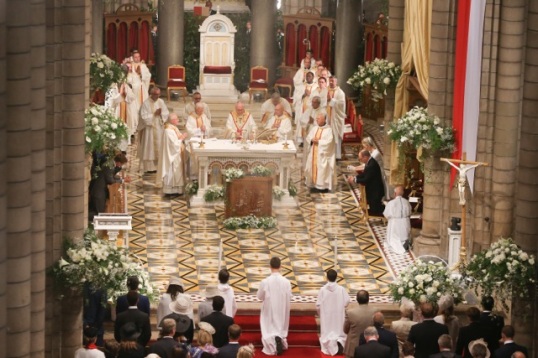 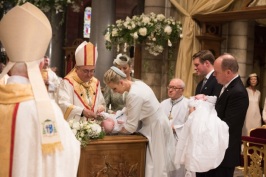 Princess Charlene with Prince Jacques during the baptism, May 10, 2015 @Michel Danino-5 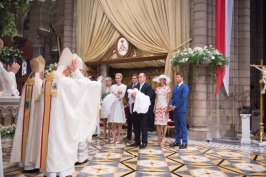 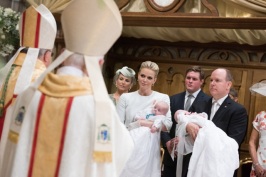 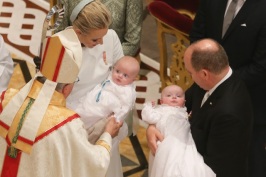 The little royals very calm during the baptism ceremony, May 10, 2015 @Michel Danino-6 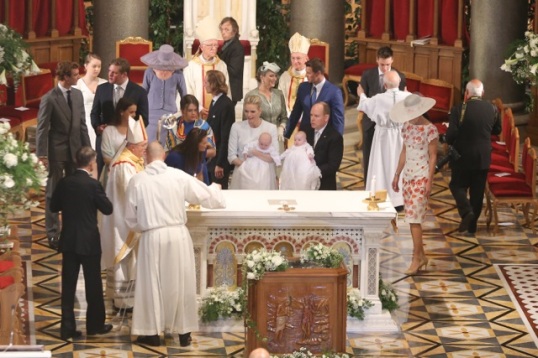 Princess Charlene and Princess Albert with their little children, surrounded by the Godmothers, Godfathers and close family after the Baptism ceremony, May 10, 2015 @Michel Danino-9

Princess Charlene was looking very happy and radiant in a stylish ivory Dior Haute Couture ensemble, with a pillbox hat and knitted gloves. The proud Mom had participated in the selection of her children’s outfit that consisted of Dior long and flowing cotton gowns with Calais lace trimming and floral embroidery,with the twins respective monograms, and matching bonnets. They could be recognized easily as each of them was wearing blue and pink pacifiers with their names.

After the moving ceremony, Charlene and Albert presented their babies to the people of the Principality outside the steps of the cathedral, where the folkloric group Les Palladiens danced in their honor. The little royals were driven to the Palace while their parents did the walking to greet the well- wishers that lined the streets to the Palace Square that was decorated with thousands of pink and blue balloons, giving a warm and vivid ovation to their Prince and Princess. The births were greeted with cannon fire, following the Monegasque tradition. In the afternoon there was a more intimate gathering in the Palace Throne with a presentation of medals to the royal twins and their godparents. Hereditary Prince Jacques received the Grand Croix in the Order of Grimaldi and his sister Princess Gabriella was made Grand Officer. 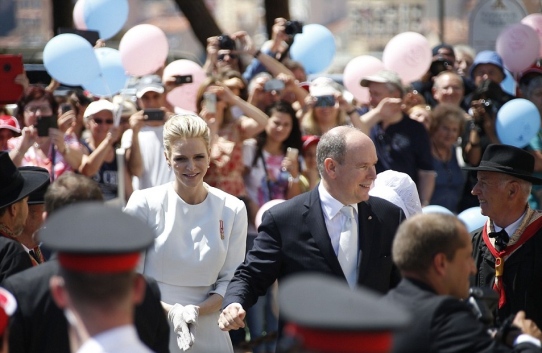 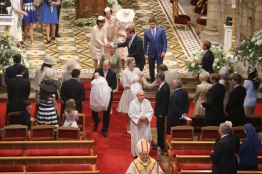 Prince Albert and Princess Charlene greeting their families after the Baptism ceremony, May 10, 2015 @Michel Danino-10 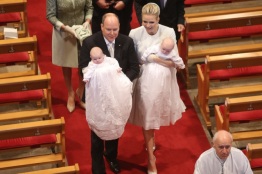 Prince Albert and Princess Charlene with their beautiful little children exit the Cathedral after the ceremony, May 10, 2015 @Michel Danino-12