As it is the tradition this past Sunday the best ranked pros met the press. Lets start in order of ranking. 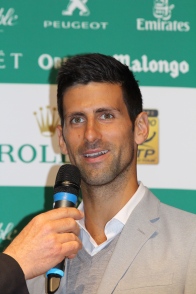 Novak Djokovic, the 28-year-old Serb World No.1 is always happy to play at home. He has the continuous pressure of those on the top to keep there the longest time possible. He is the favorite and the one to beat but the Serb surely can handle it, using all his technical abilities and specially his mindful meditation technic. Novak’s objective is to conquer his third crown in Monte-Carlo.

Andy Murray, the 28-year-old Scottish No. 2 is back in Monte-Carlo now father of a little baby, who apparently has not interrupted his sleep, so he is in good form. He has to get used to playing on clay even if he had some practice in Miami and then when he returned to Europe. Last year he did very well in Roland Garros so he expects to do well on clay this season.

Roger Federer, now 34 years old and No. 3 in the ranking, the Swiss will be playing his first tournament since his arthroscopic surgery for a meniscal tear in his left knee after the Australian Open, and this will be a real test to see if he totally recoved. He declared himself satisfied with the way he I moving on the court and how he hits the ball. Federer said “To start with I will concentrate on the first match, and surely then, if I win, I will think to win the second, then the third… and the title at the end. But that will be afterwards!” 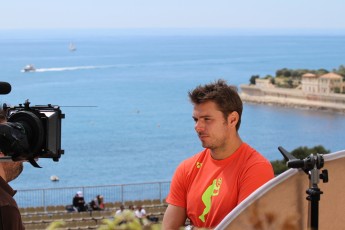 Stan Wawrinka, the 31-year-old No. 4 Swiss, considers the Monte-Carlo Masters as an important moment in the season for him who loves clay. “Monte-Carlo is the first tournament, within an splendid framework, with great play conditions, all the players are here, so it will be a must to be ready from the start to play well this week,” he told the press. He confessed he does not feel the pressure from having won Roland Garros in 2015. He will have the pleasure to defend the title in Paris, but he is not thinking on that yet as he is concentrated on the task on hand, as the title holder.

Rafa Nadal, the 29 year-old No. 5 Spaniard said: “It I always good to come back here. I alwlays have a special feeling at the Monte-Carlo Rolex Masters: it is a superb place to be and play tennis.” After he was forced to retire in Miami during the second round when he felt very weak, he has totally recovered and trained on clay at home in Majorca and at the Monte-Carlo country club. The Spaniard has a chance to add another victory to the 8 consecutive titles he had in this tournament from 2005 through 2012. Vamos Rafa!

Tomas Berdych, the 30 year-old No. 7 (seeded 6 in MC) Czech will try his best to get to the finals again in Monte-Carlo like he did last year where he lost to Djokovic in overcast conditions, after taking the Serb to three sets in tow hours and 43 minutes, providing a real test for the No.1. Will the Czech do it again this year? 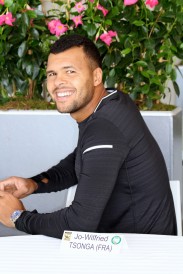 Jo-Wilfried Tsonga, the 30-year-old No. 9 (seeded 8 in MC) French considers Monte-Carlo as a stop-over on the road to Roland Garros, and as he has usually done well on clay on French soil, he hopes to have a good tournament. “Monte-Carlo is usually revealing, he who does well here usually does the same in Roland Garros,” he said.

The French favorite will be playing on a surface he loves in front of a public that adores him. Will he be able to advance to the finals in Monte-Carlo? The charming smile in the photo reveals he is very confident! Que sera sera!