Within the framework of the 56th Monte-Carlo Television Festival running from June 12-16, 2016, the PeaceJam Foundation invited Nobel Peace Prize winner Rigoberta Menchú to their Conference and the premiere of her documentary on indigenous rights at the One Billion Acts of Peace Awards Ceremony. The PeaceJam Foundation, lead by Dawn Engle and Ivan Suvanjieff, is the global leader in developing youth and adult leaders engaged in their communities, accomplishing their mission through their valuable partnership with 13 Nobel Peace Prize winners.

Rigoberta Menchú Tum, who was living in self-imposed exile at the time, was awarded the accolade in recognition of her work highlighting the exploitation and persecution of her country’s indigenous people during its brutal 36-year civil war. In the same year she received the Nobel Peace Prize, the indigenous activist founded the self-titled Rigoberta Menchú Tum Foundation with her award money, dedicated to the pursuit of peace and promotion of indigenous people’s rights. She currently holds the position of Goodwill Ambassador of UNESCO and presides over the Indigenous Initiative for Peace, an international indigenous leadership network.

It is true that people who take action against injustice are sometimes found to be controversial in the way the pursue their objectives, but the important fact is that Rigoberta Menchú has given a voice to indigenous people  everywhere.

Movie premiere of Rigoberta Menchu: daughter of the Mayas

PeaceJam works on the creation of full-length documentary on each of the 13 prizewinners that premiere each year in Monaco at the One Billion Acts of Peace Awards Ceremony. On Monday, June 13, 2016, within the framework of the Monte-Carlo Television Festival, the world premiere of the film “Daughter of the Maya” was screened at the Grimaldi Forum in the presence of Rigoberta Menchú. The documentary will be launched worldwide during the International Day of Peace on September 21, 2016. It tells the story of a poor girl born in 1959 a remote mountainous region of Guatemala torn apart by civil war and her determination to gain justice for her people. Rigoberta Menchu is the only American Indian having received the Nobel Peace Prize.

In 2016 PeaceJam celebrates 20 years creating young leaders committed to positive change in themselves, their communities and the world, with the collaboration of 13 Nobel Laureats mentoring youth to change the world.

It is also the second anniversary of PeaceJam’s One Billion Acts of Peace campaign that has been nominated six times for the Nobel Peace Prize, honouring five groups of people who have taken up Rigoberta’s call to create a more humane world. Dawn announced that the campaign just reached a key goal – 10 millionth acts of peace had been registered in their campaign website.

Best Non-Profit Act – Lighting the Path – This organization seeks to alleviate poverty through developing and implementing empowerment projects. They reach out to marginalized populations with education, training, and resources to empower them to improve their quality of life and let them know they are loved and valued. Dawn Malcolm founder of Lighting the Path received the award.

Best Business Act – Impact Water – This organisation exists to build clean water systems for impoverished villages in remote areas of Honduras, and to enrich the spiritual lives of its U.S. volunteers and the Honduran villages it serves. Mark Turgesen and Diane Konga were present to receive the award.

Up and Coming Peacemaker – PeaceJam Greece – On February 20th, over 220 students attended the first Peace Jam Greece Youth Leadership Conference at the American Farm School in Thessaloniki. This conference focused on empowering youth during the refugee crisis. Students were able to learn about different issues going on through lectures from guest speakers, interactive activities and group discussion. Each student was asked to bring an article of clothing to donate to refugees through the ARSIS foundation and had the chance to meet the Billion Acts of Peace winners from Ghana. It was a fun-filled event encouraging students to ‘be the change they wish to see in the world.’ Ellen Froustis, Leighanne Penna, and Georgina Vriniotos received the award for PeaceJam Greece.

Best Youth Act – Humara Bachpan –  Children led planning is a participatory approach used by Humara Bachpan campaign which aims to incorporate the views and opinions of children in the urban planning and development process. It is a process in which children map their communities in terms of identifying the issues, analyzing and prioritizing those and coming with solutions for creating their dream neighborhood. It is a process to capture the needs and aspirations of children for creation of their dream neighborhoods leading to better living conditions. The findings from the tool can be used an evidence for influencing the city master plans and zonal developments plans and urban development policies ultimately leading to creation of child friendly cities. Jasmin Nissa, Rupak Kuamar Gouda , Utsav Choudhury and Sradhanjali Sahoo received the award for Humara Bachpan.

Dawn Eagle and Ivan Suvanjieff, PeaceJam Foundation co-founders, presented the 2016 Visionary Award to HRH Princess Camilla of Bourbon Two Siciles, Duchess of Castro, for her efforts in promoting women’s equality, and for her extensive charitable work.

In turn HRH Charles of Bourbon of Two Siciles Duke of Castro, recognised Rigoberta Menchu with the title of “Lady” from their Real Order of Francis I dated June 1, 2016. 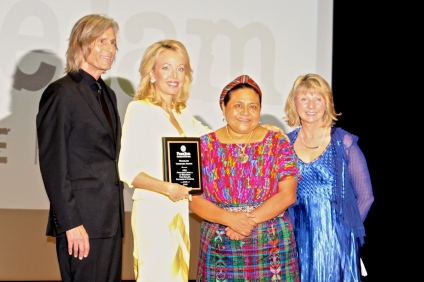 Rigoberta Menchu receiving the order of %22Dama%22 from Carlo of Bourbon Two Sicilies, Duke of Castro with the Duke of Castro, Dawn Engle and HRH Princess Camilla of Bourbon @CelinaLafuenteDeLavotha

Lara Isoardo, Events Director of the Monte-Carlo Television Festival, announced the creation of the Peacejam Jury Prize, to be launched in 2017. The prizes will recognize the TV program or Documentary film that best embodies the goals of the One Billion Acts of Peace Campaign and the spirit of the Nobel Peace Prize. Isoardo said: “We are pleased to embark on this partnership with PeaceJam tonight, and the Jury Prize is expected to become a unique component of the TV Festival for years to come.”

Reception honoring Rigoberta Menchu at the Yacht Club of Monaco

An exclusive and now traditional reception and dinner took place on Friday, June 10, 2016, at the Yacht Club of Monaco to honor Rigoberta Menchu. In 2015 the special guest was Nobel Peace Prize Adolfo Perez Esquivel. It was an incredible opportunity to partake with the Laureate and other PeaceJam supporters from the Principality and other countries.

For the organization of their different events in Monaco, PeaceJam counts with the invaluable assistance of Monegasque Claudia Abate-Debat, who is their ambassadress in the Principality, plus the support of other concerned local personalities. 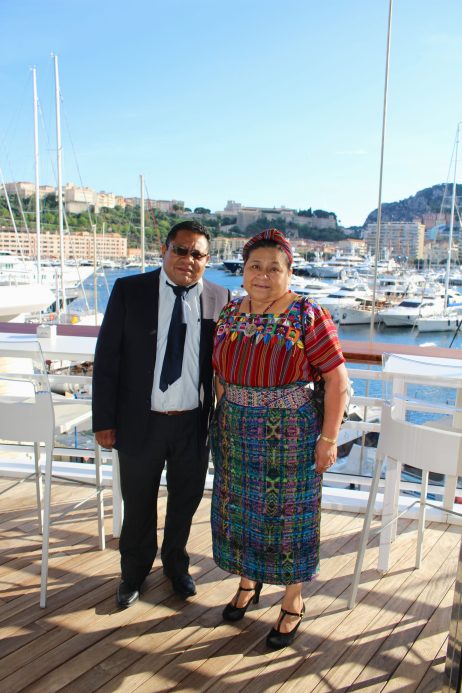 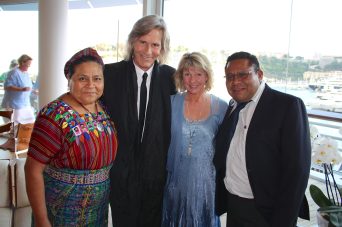 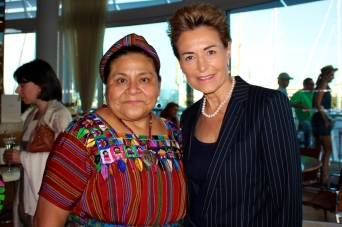 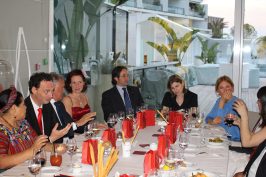 Dinner in honor of Rigoberta Menchu at YCM @CelinaLafuenteDeLavotha 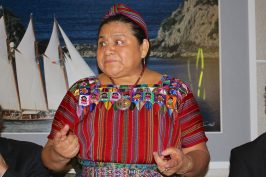 Rigoberta Manchu at the dinner at YCM @CelinaLafuenteDeLavotha 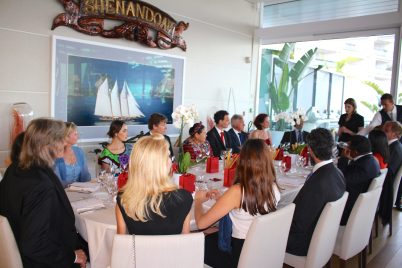 Dinner at YCM in honor of Rigoberta Menchu @CelinaLafuenteDeLavotha 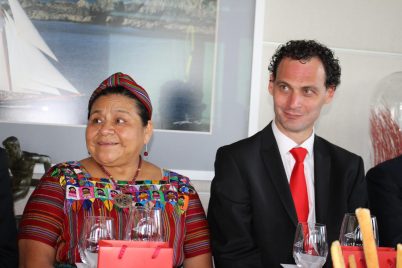 Students leading the way for peace in the world

The 2016 PeaceJam Monaco Student Leadership Conference took place at the Technical and Hotel School of Monaco from June 11-12, 2016. It included a moving, passionate and inspiring speech by Rigoberta Menchu, as well presentations from the students on their community services projects. University students are trained to mentor younger ones and lead small reflection groups where they debrief the social justice issues discussed during the conference. The service projects and high-quality workshops teach 21st century skills meant to prepare the students to be active change-makers. Students engage in service-learning curriculum and created projects for social good, and then share them with the Laureate. The global citizen’s campaign, One Billion Acts of Peace, led by the 13 Laureates and students create awareness and engage the world to address the most pressing issues facing our planet.

Rigoberta Menchu, her husband Angel Canil and the Monaco students working on a project @Christine Wu

“The indigenous peoples never had, and still do not have, the place that they should have occupied in the progress and benefits of science and technology, although they represented an important basis for this development.” Rigoberta Menchú