Coexistence between wildlife and humans 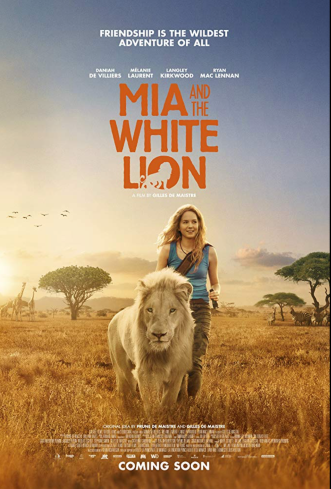 The film will be released to the public on December 26, 2018 in France and later on worldwide.

Members of the press had the chance to have an interesting interactive exchange with film director Gilles de Maistre, Jacques Perrin, screenwriter Prune de Maistre, Kevin Richardson, the Lion Whisperer who owns a lion’s sanctuary in Africa, and the main actors Daniah De Villiers (Mia Owen), Langley Kirkwood, and Ryan Mac Lennan. French actress Melanie Laurent who plays Mia’s mother in the movie, was absent due to another film engagement in Italy. 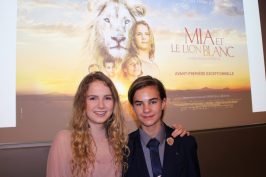 Everlasting friendship & a call to save the lions

This English language film with French subtitles is based on an original story written by Gilles de Maistre’s wife Prune de Maistre after they visited lion-breeding farms in South Africa. It is co-produced by Jacques Perrin’s Galatée Films and Studiocanal, that has been partly financed by the Prince Albert II of Monaco Foundation and the Monaco Government.

The dramatic story evolves around a rebellious 11-year-old young girl  called Mia, who has to leave London to move to South Africa with her brother and her parents who have a Big Cats farm. Unhappy to be forced to leave her natal city and her friends, she rejects her new life in Africa. But everything will change when a charming white lion named Charlie is born in their farm and becomes Mia’s closest friend.

It is very important to notice that Charlie is not a pet but a wild animal, who ultimately needs to return to his habitat. Gilles de Maistre explained that the lion was filmed when he was up to it, without forcing him, like you do with any other actor depending on their whim. 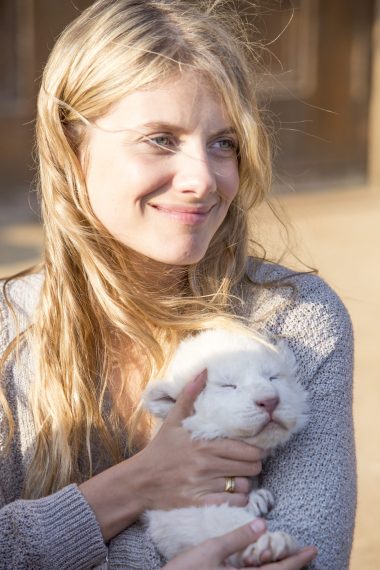 The film was shot during three years so that the young star Daniah De Villiers and other support cast members could truly bond and grow with the lion in the film, with the assistance of Kevin Richardson the Lion Whisperer, who taught them that animals just like humans need love and affection.

Mia and Charlie will grow together in real life and in the film, becoming inseparable. When Mia reaches 14 years old the lion becomes a magnificent 3-year-old adult, Mia discovers the truth about her father’s business when he decides to sell the lion to big game trophy hunters as a last ditch effort to save their farm. Desperate Mia does not have any another choice but to save him and runs away with him. Well, I will say no more, so you find out when you see the movie!

According to Fiona Mill, director of Lion’s Rock Big Cat Sanctuary, lions’ farms promote a market for canned lion hunts putting a clear price sticker on the head of every wild lion. They foster a financial incentive for local people, who collude with poachers or overlook illegal lion kills. Trophy-hunters who begin with a captive-bred lion may then graduate to the real, wild thing.

The actors are excellent and I am sure we will be seeing Daniah De Villiers in many future films, the movie is very well done and really entertaining, a must-see for the family as a whole, while at the same time it exposes the practice of trophy hunting, a gruesome hobby and the lack of its contribution to conservation, by encouraging wiser alternatives such as ecotourism. Trophy hunters prefer to kill the largest and rarest wild animals for the purpose of showing off the prize at home.  The film’s heart-rending message is to take action to eliminate these cruel practices and protect endangered wildlife throughout the world. 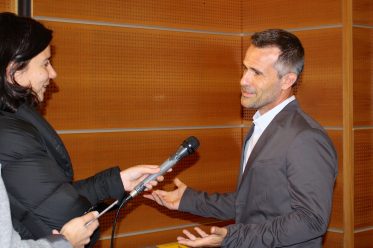 The Kevin Richardson Foundation, launched in 2018 by Kevin Richardson the Lion Whisperer, is a non-profit conservation organization for protecting lions, and counts with the patronage of HSH Princess Charlene of Monaco. Its mission is to change and reverse the state of Africa’s declining lion population by purchasing habitat and raising awareness to create safe, natural spaces where lions and other native species can flourish. (Photo: Kevin Richardson being interviewed by Monaco TV, Monaco November 30, 2018 @Celina Lafuente de Lavotha)

By becoming partner with other organizations and engaging communities surrounding these protected areas, the foundation is committed to enhance coexistence of humans and wildlife avoiding conflicts, while improving living conditions for the locals.

The Kevin Richardson Wildlife Sanctuary provides a self-sustaining African carnivore sanctuary for the purposes of wild species preservation through education, awareness and funding, especially pertaining to the rapid decline of large carnivores in Africa due to habitat loss, human-predator conflict, the illegal bush meat trade, unscrupulous hunting, disease and their illegal trade.

Kevin emphasizes that being with animals have taught him one of the most important lessons, which is not to exploit nature, only use what you need.

Kevin Richards said: “The film will make its theatre debut this December 26, 2018 in France and later on worldwide. We are incredibly proud that after more than three years of hard work, dedication and perseverance we will finally be able to share this beautiful heartwarming. Rescuing lions from captive conditions will not save lions, however capturing the hearts of millions of people around the world through a story just might.”

“Leave a legacy behind of saving wild lions.” Kevin Richardson