By Celina Lafuente de Lavotha November 8, 2019 Festival of the Earth Julian Lennon preservation of the environment The White Feather Foundation

To live in a better world

The 4th edition of The Festival For the Earth, an international forum focusing on environmental issues, created by artist Maria Rebecca Ballestra and co-organized by the Monegasque association MbR Art, with the support of the Prince Albert II of Monaco Foundation, run from November 6-7, 2019 at the Oceanographic Museum of Monaco.

Environmental activist Julian Lennon was one of the guest speakers on Wednesday. I have the privilege to know Jules (as his friends call him) for many years and have been following and supporting his infatigable work, so there could not be a more compassionate and caring individual, to better defend the preservation of the environment for present a future generations.

Julian Lennon, son of John Lennon and his first wife Cynthia, is a multifaceted Grammy-nominated British singer/songwriter, philanthropist, photographer, and successful author who recently launched his book Love the Earth part of the New York Times best-selling trilogy, following Touch the Earth and Heal the Earth.  They are beautiful stories for boy and girls 3 to 6 years old, who are invited to get on board the White Feather Flier, a magical plane that can go wherever you want, and learn how precious planet Earth and her natural resources are, with the goal of creating awareness in little children about the world they live in. 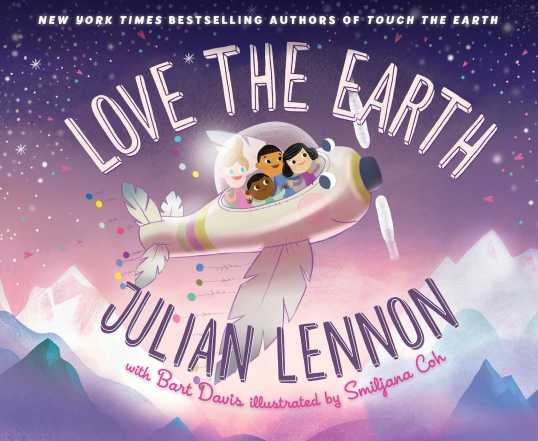 Love the Earth by Julian Lennon

Touch the Earth by Julian Lennon 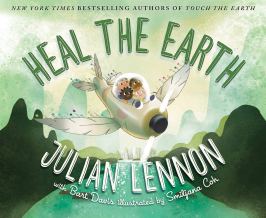 Heal the Earth by Julian Lennon

A portion of the proceeds from book sales go to support the environmental and humanitarian efforts of the White Feather Foundation, the global environmental organization Julian founded in 2009, to promote education, conservation, and the protection of indigenous cultures. Julian presented the 3-book set to Prince Albert II for his royal twins, after his presentation.

Thanks to the success of the book trilogy Jules is planning to produce and develop with Gaumont an animated TV series. He is also planning to write another trilogy for children 6 to11 years old.

The White Feather that changed the purpose of his life

Jules mentioned why the white feather was a prominent motif in his life: “Dad had said to me that when he died, if he could get in touch, he’d float a white feather across the room—not down, just straight across. So I’ve been looking for that, or something strange.”

Fourteen years later in 1998, he got the sign that he was searching for. While in Australia promoting his fifth album Photograph Smile, Jules was visited by members of the Mirning tribe, also known as the Ngandatha, an indigenous group from the coastal regions of the Great Australian Bight. A tribal elder presented him with a white feather, asking Julian to use his voice to help them with their plight.

He then spent the next several years producing Whale Dreamers, a documentary showing how the Mirning were dispossessed of both their lands and their spiritual connection to the whales when their waters were opened to whaling. The film was part of the Cannes festival in 2007; and that same year, Julian decided to further his mission and founded The White Feather Foundation.

Jules is one of the Executive Producers for the new documentary Kiss the Ground, directed by Josh and Rebecca Tickell, that explores a viable, low cost way for farmers and ranchers to rebuild their soils and revitalize their communities, while helping reverse global warming.

He is also involved with another documentary Tawai: A Voice from the Forest, where a native reminds us that no culture is above any other culture. We are all the same and share the same planet.

“What we do to the planet we do to ourselves.” Julian Lennon