Earlier in the week the Monaco Press Club organized an exclusive interview with Italian coloratura mezzo-soprano opera singer Cecilia Bartoli at the Automobile Club of Monaco, in the presence of Jean-Luis Grinda, Director of the Opera of Monte-Carlo, Bernard Splindler, writer, journalist and reporter at Radio Monte-Carlo, and Cedric Verany, journalist of Monaco Matin. 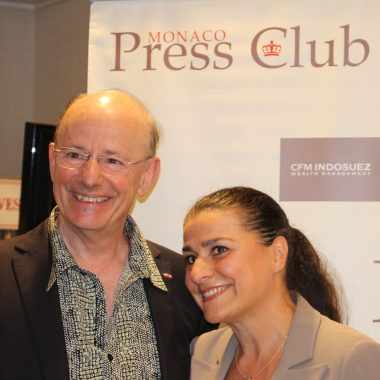 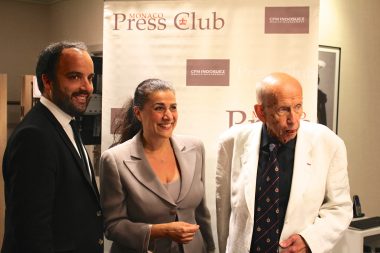 It was a unique privilege to meet the enchanting Opera prima donna just a few days before the inaugural concert of the orchestra The Musicians of the Prince recently created at Bartoli’s initiative in close collaboration with Jean-Louis Grinda, and the fervent support of Prince Albert II and his sister Princess Caroline of Hanover, parons of arts and culture in the Principality (see photo inset). The renowned singer became a resident artist under contract with the Opera of Monaco for a tenure of six years, a first of this kind of artistic engagement for this institution. The renowned singer chose Monaco thanks to the excellent working conditions offered to her, starting with a concert in the Palace plus the privilege of future performances

in the magnificent Salle Garnier.

Cecilia Bartoli sounded very enthusiastic, and she was smiling broadly with bright stars in her eyes, when explaining that her idea came to mind, inspired in the Baroque times when the royal and princely courts throughout Europe had their own orchestras. It was there where the musical life strived, and where compositors presented their new pieces, a true creative hub for musicians from every country to exchange ideas. In linking her name to the Principality, Cecila Bartoli remembers that the Opera of Monaco was one of the first international stages to give her a contract when she was only 23 years old for a performance in the Barber of Seville of Rossini.

Cecilia Bartoli, born in Rome, from lyric artistic parents, was attracted to the sensuality of Flamenco dancing from an early age before immersing herself totally into singing to become one of the greatest contemporary interpreters. It was at the age of sixteen that she decided to concentrate in her voice having her mother Silvana Bazzoni Bartoli, who remains her one and only voice teacher up to this date. The public discovers her during a concert organized by the Paris National Opera in honor to Maria Callas for the 10 anniversary of her disappearance, and from there she continues on three decades ascending brilliant career into stardom.

A very curious woman and a true story-teller, and like Maria Callas also a comedian, she is always in search of new ways of making music and expressing her passion for life, has now given birth to the itinerant orchestra The Musicians of the Prince, composed of la crème-de-la-crème of international artists, led by talented concertmaster violinist Ada Pesch, playing baroque and renaissance music with ancient instruments. For their first presentation Bartoli chose a Baroque repertoire but the diva said they would not be limited to that type of music, adding that they are very flexible. About this new musical venture Jean-Louis Grinda affirmed: “ Cecilia Bartoli transforms in gold whatever she touches.” He added, “She brings to Monaco talent, prestige and savoir faire.” The ensemble will surely enhance the image of the Principality in the international artistic scene. The Alpha Group is the principal sponsor of this project, the support of Rolex, plus an added important financial contribution from the Monaco Government that aided in the set up and launching of the ensemble.

The Musicians of the Prince

Debut concert in the Princely court

On Friday, July 8, 2016, The Musicians of the Prince made their anticipated debut with a Handel concert in the Honor Courtyard of the Palace of Monaco during a warm summer evening under the stars, in the presence of HSH Prince Albert II and HRH Princess Caroline of Hanover. It was a magic performace and the privileged public expressed their delight with a standing ovation. It was a unique experience to be present at the birth of such an orchestra, after a project that took two years in the making.

After the successful baptism concert Bartoli and her ensemble will depart on a tour to Amsterdam, Paris, Brussels, London, Munich, Vienna, Zurich, Hambourg, Luxembourg. They will continue their voyage in 2017 around the bicentennial celebration of the creation of Rossini’s Cinderella, as well as a participation in the prestigious Salzburg festival, where Cecilia Bartoli is the artistic director, for a scenic version of Handel’s opera Ariodante.

For Cecilia Bartoli this is a dream come true, as her objective is to revive the old tradition of royal and princely court music, representing the colors of Monaco throughout the world. The Principality is rejoicing for having a new prestigious cultural ambassador of her caliber.

“I am a person of the 18th century.” Cecilia Bartoli