Charming actor Lambert Wilson back in Monaco to sing Montand

It was a real privilege to meet Lambert Wilson in the flesh at an exclusive interview organised by the Monaco Press Club this past Monday, November 21, 2016, at the Hermitage Hotel. Lambert Wilson has his heart in his hand when speaking, very frank and direct with no strings attached, passionate about his métier as a multifaceted actor, that allows him to experience different lives through the characters he personifies. As food wines Wilson gets even better with time, and at  58 he is at the pinacle of his career and continues to reinvent himself. 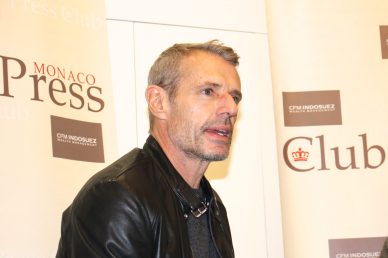 The heartthrob actor had been to the Principality recently to talk about the film Odyssey where he brings to life Commandant Jacques Cousteau, that premiered at the Oceanographic Museum of Monaco on October 11, in the presence of Prince Albert II. Now Lambert Wilson is back for his performance in avant-premiere at the Salle Garnier on Thursday, November 24 as part of the Monte-Carlo Jazz Festival, with “Wilson chante Montand.”

You may still have the chance to get a ticket by visiting the Monte-Carlo Jazz Festival program.

Below is a recording of Lambert Wilson live at Studio Ferber in 2015, singing “Les Feuilles Mortes”, written by the French surrealist poet Jacques Prevert. In 1945, Prévert wrote the film script “Les Portes de la Nuit” (a film of Marcel Carné – 1946), from a ballet “Le Rendez-Vous” created by Roland Petit in 1945.

The popular French actor, born in 1958 in Neuilly-sur-Seine, had already had incursions into the Yves Montand repertoire, during his first musical shows in the 1990’s. He had been planning a project to sing his own songs, but his work as an cinema actor and the musical comedies produced at the Châtelet in Paris did put that dream on the back burner. Then Wilson finally accepted a proposal from Sony Classical around Montand, and the album “Wilson chante Montand” was launched in 2015, thanks to the complicity with pianist Bruno Fontaine, with whom he had already collaborated on the film by Alain Resnais, On connait la Chanson. Accompanied by six musicians Wilson revives a époque within the dynamics of a jazz group, honoring Yves Montand in the 25th anniversary of his disappearance.

“The real inequality among individuals, that is almost insurmountable, is intelligence.” Yves Montand