The PeaceJam Foundation, created back in 1996 by peacekeepers Dawn Engle and Ivan Suvanjieff, is an international organization whose mission is to encourage youth to become leaders of peace by committing to positive self-change, in their communities and by extension the world at large, through carefully prepared programs and aided by the unique inspiration from 14 Nobel Peace Prize Winners, who generously share their souls, skills and infinite acumen.

This year’s PeaceJam guest of honor was Oscar Arias Sanchez from Costa Rica, who was awarded the Nobel Peace Prize in 1987 for devising a peace plan to put an end to the cruel civil wars that were devastating Central America, aiming a free elections, safeguards for human rights, and an end to foreign interference in the countries’ internal affairs.This highly educated and compassionate man gained the respect of country leaders everywhere, but he did not stop there and made it his life mission to pursue real disarmament, as regimes that abuse human rights are eagerly supplied by the world’s arms producers. 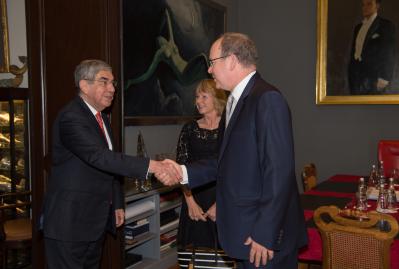 PeaceJam annual peace initiative in the Principality counts with the invaluable assistance of Claudia Abate-Debat, Founder and Executive Director of Post Conflict Development Association of Monaco. Claudia served on the Board of PeaceJam from 2008-2016 and was two-term Chair of the Board during which time she was able to introduce Monaco to PeaceJam programming an now she is the Monaco Coordinator for the organisation.

“Without a shot fired” premiered in Monte-Carlo

The film “Without a shot fired” that recounts Oscar Arias ongoing campaign for sustainable peace was premiered at the 57th Monte-Carlo TV Festival. It follows his life over the course of more than fifty years, as he travels the world in a quest to stop the spread of the weapons of war, pleading for disarmament and sustainable peace. A story of dedication and triumph.

Synopsis: “Mine is an unarmed people, whose children have never seen a fighter or a tank or a warship. Our experience shows that security does not lie in weapons or fences or armies. More combat planes, missiles and soldiers won’t provide additional bread for our families, desks for our schools, or medicine for our clinics.” Oscar Arias

That was a great first step, but Oscar Arias continues his relentless work because he knows that to prevent war and end the huge waste of money on weapons and the loss of so many lives, we need to demilitarize international relations, so governments need to agree on a program to reduce all types of weapons, while empowering the UN to keep the peace. The United Nations Peacekeeping began in 1948, and since then it has often been called upon to prevent disputes from escalating into war, or to help restore peace when armed conflict does break out, and to promote lasting peace in societies emerging from wars. I firmly believe every member state is intrinsically responsible for the success or failure of the UN peace efforts they so much criticise.

It is true that 186 countries have signed the Nuclear Non-Proliferation Treaty, committing to pursue negotiations on general and complete disarmament under strict and effective international control. Now those same governments have to go from an agreement to real action. Additionally, the Arms Trade Treaty (ATT) is an international treaty that regulates the international trade in conventional arms and seeks to prevent and eradicate illicit trade and diversion of conventional arms by establishing international standards governing arms transfers. The ATT entered into force on December 24, 2014 among 92 states parties and signed by 130 states.

“Many developing countries continue to be burdened by high percentage of their population living in poverty. Yet, instead of addressing the root cause of conflict, many states, ironically, increase their military might in order to control increasingly desperate populations.” Oscar Arias Sanchez

In spite of the efforts of Nobel Peace Laureates and compassionate human beings, global military spending rose for the second consecutive year in 2016, reaching over USD 1.686 trillion and the U.S. is leading the pack. 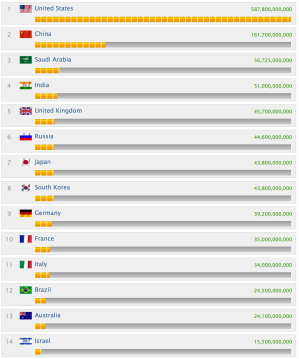 The 5 largest arms exporters and their regional recipients, 2012-16

Oscar Arias pleads for sanity when he says: “The children of the world want and need are health clinics and schools, not tanks or armed helicopters or fighter jets.” Or when he affirms: “Our world is certainly dangerous, but is made more dangerous, not less, by those who value profits over peace.”

The 2017 PeaceJam Monaco Student Leadership Conference at the Lycée Technique et Hotelier in Monaco, organised at the initiative of Isabelle Bonnal that heads the Monaco National Education, Youth and Sports, included a passionate an inspiring keynote address by Nobel Peace Prize Laureat Oscar Arias Sanchez, as well as presentations from the students on their community service projects that prepare them to be active change-makers. Students engage in service-learning curriculum and created projects for social good, addressing the most pressing issues facing our planet, and exchange them with the visiting laureate. Students had the opportunity to experience the Nobel Laureate’s culture through music, dance and performances. 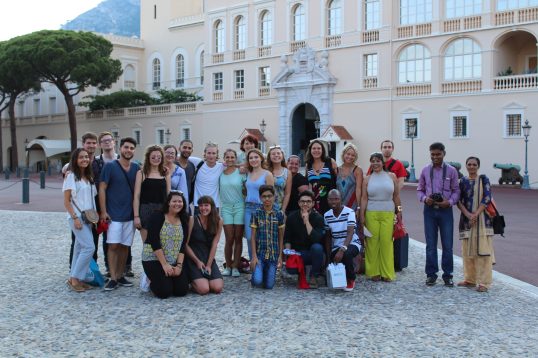 More than 30 million acts of peace and counting

On May 29, 2014, Dawn Engle and Ivan Suvanjieff, launched the One Billion Acts of Peace Campaign at the United Nation’s Social Innovation Summit. This campaign is an international global citizens’ movement designed to tackle the most important problems facing our planet. Acts of peace are thoughtful actions aimed to creating world peace based on one of the ten key issues defined by the 14 Nobel Peace Laureats leading this campaign. Up to this date more than 30 million acts of peace have been registered and the objective is to inspire 1 Billion by 2019. Join the movement for peace!

Aerorobotics 7 – 14 year old, Harshwardhan Zala, created a prototype of a landmine-detecting drone after reading in newspapers about high army casualties due to landmines.

Ruta Pacifica – Since 1996, “Ruta Pacifica” has used nonviolence and civil resistance to promote the inclusion of Colombian women in the peace process.

Bead for Life – BeadforLife helps women across Africa transform their lives through business training and confidence building, and is expanding globally via Street Business School.

Curtin University – The Centre for Aboriginal Studies aspires to contribute to positive social change for Indigenous Australians through higher education and research.

Best Up and Coming Peacemaker

The PeaceJam Foundation announced the winner of the First Annual PeaceJam Special Jury Prize, for the film “Lontago Dagli Occhi” (Out Of Sight)” by Rai Radiotelevisione Italiana at the Monte Carlo Television Festival on June 20, 2017, adding a unique and important humanitarian ingredient to the prestigious Monte Carlo Television Festival that was established in 1961 by Prince Albert I and Princess Grace, the former actress Grace kelly. The purpose of the prize is to recognize outstanding Television Films that embody the spirit of the Nobel Peace Prize, alongside the famous Golden Nymph Awards. Nobel Peace Prize winner and former President of Costa Rica Oscar Arias presented this prestigious award to Luca Cambi, Selvaggia Castelli and Domenico Iannacone. The Peacejam Special Jury Prize adds a unique new humanitarian component to the Television Festival.

Through dramatic images, testimonies and symbolic stories, “Lontago Dagli Occhi,” tells the story of a generous island in the Strait of Sicily that welcomes refugees after their difficult journeys. The film was chosen by an international assembly of 11 distinguished personalities headed by PeaceJam founders, Ivan Suvanjieff and Dawn Engle, nominees for the 2017 Nobel Peace Prize. 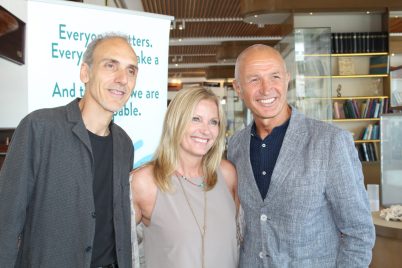 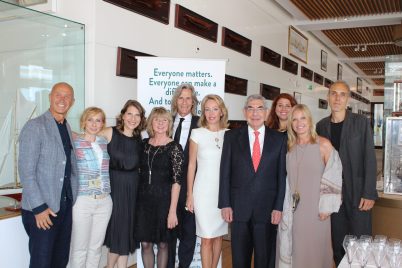 In addition to the Special Jury Prize, PeaceJam also presented “The PeaceJam Leadership Award” on June 20, 2017, which recognized someone in the Monaco Community who has done exceptional work in their field, who has promoted the work of PeaceJam, and who has embodied the spirit of the Nobel Peace Prize and Billion Acts Campaign. The winner was the editor of Monaco Reporter chosen for her work educating the public about PeaceJam, and covering worthy events in Monaco on a regular basis, and disseminating it throughout the world thus creating bridges of educational and cultural understanding.

“I was honored and deeply humbled to have been selected as the recipient of The PeaceJam Leadership Award, as founder of Monaco Reporter, specially when I received it from the hands of a hero, Nobel Peace Prize Laureat Oscar Arias. It is an inspiration to redouble my commitment to disemminate PeaceJam message of peace throughout the world, because like Oscar Arias, Dawn Engle, Ivan Suvanjieff, and the millions of unsung heroes. we believe that peace is possible. Together with my husband Zsolt Lavotha we are proud to support PeaceJam initiatives.” Celina Lafuente de Lavotha, Founder and Editor of Monaco Reporter 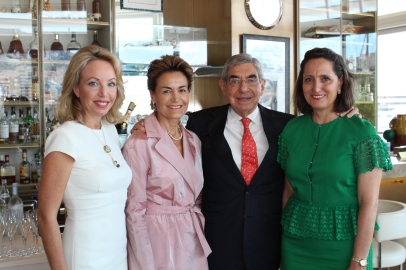 “Peace is a never-ending process, the work of many people in many countries. It is an attitude, a way of life, a way of solving problems and conflicts.” Oscar Arias