A race linking two cities bathed by the Mediterranean sea

Dear readers I hope you have been enjoying your vacations in the cool mountains, by the sea or in the summer deserted cities of Europe or other exotic parts of the world. We at Monaco Reporter have taken a hiatus during the estival season. Prince Albert himself, back from his family vacations in exotic French Polynesia, was in Sicily for the kick off of the Palermo/Monte-Carlo famous regatta yesterday, Tuesday, August 21, 2018. On this occasion, Mayor Leoluca Orlando inducted Prince Albert as Honorary Citizen of Palermo.

Prince Albert and Agostino Randazzo at the departure of Palermo:Monte-Carlo regatta 2018 @Carloni-Raspar CVS

It was exactly high noon when the 53 teams lined up at Mondello’s Gulf for the start of the 14th edition of Palermo-Montecarlo, the 500 nm long open water sailing race that links the two cities that share the same sea. HSH Prince Albert II of Monaco, President of the Yacht Club of Monaco, fired the gun to signal the anticipated departure, alongside Secretary General Bernard d’Alessandri and Circolo della Vela Sicilia President Agostino Randazzo. It was with all ballooned sails that the diverse fleet left the Gulf of Mondello for this offshore race that is one of the stages on the International Maxi Association (IMA) calendar. “Thanks to all the hard work put in by President Randazzo and his team, this race has become a Mediterranean classic. I am also thinking of Angelo Randazzo who would have been very proud of what has been achieved in these last 14 years,” said Bernard d’Alessandri.  “This offshore race perfectly illustrates the close ties that we maintain with Circolo della Vela Sicilia and the Yacht Club Costa Smeralda, two clubs with whom we are twinned and who represent the dynamism driving sailing in the Mediterranean.”

With the Mediterranean sea as their playing field, competitors were ready to engage in some tight-fought duels, be it round the passage gate off Porto Cervo in Sardinia or up the coast of Corsica before they head for the Principality. Their main goal is to beat the record set by Esimit Europa 2 in 2015 of 47 hours 46 minutes 48 seconds. Teams will have to bide their time for the first 24 hours as conditions are set to be light and changeable until the Strait of Bonifacio in the wake of a stormy front that has just gone through. 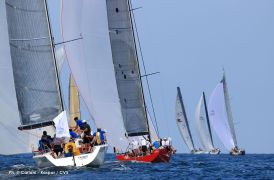 A little bit of history

The Palermo/Monte-Carlo is an offshore regatta among the most important and renowned in the Mediterranean Sea. The race is part of numerous international circuits including the Italian Offshore Championship of the Italian Sailing Federation, the Mediterranean Offshore Trophy, the Owner of the Year delivered by UVAI association and the IRC Championnat et Trophees Inshore and Offshore Mediterranee en Equipages. Founded in 2005 following both wishes from Principality of Monaco Consul and the City of Palermo sports council to unite two historically friendly cities through a yacht race, the Palermo/Monte-Carlo offers a regatta with high technical contents and beautiful landscapes to all sailing lovers.

She may be favorite to win but Rambler 888, led by four-time America’s Cup winner Brad Butterworth, will have to stay vigilant throughout the 500 nautical miles of this course. With the goal being to stay under the 50-hour bar, George David’s crew will be keeping an eye on Bryon Ehrhart’s Lucky. The American owner won the 2017 Palermo/Monte-Carlo and is determined to repeat the feat this year on a different boat.

Everyone, experienced competitors or newcomers alike, has a chance to make its mark, even unexpected Alongside racing thoroughbreds set on victory at all costs are crews of newcomers and some unexpected participants like Ad Maiora, a trimaran launched in 1988 as Fleury Michon IX, owned by big names in sailing like Florence Arthaud and Philippe Poupon.

Following a first experience at the last Rolex Giraglia, the Yacht Club de Monaco is repeating the Sailing Youth Offshore Academy U25 initiative on the First 50 Freedom. Comprising five youngsters from the YCM’s Sports Section and three from Circolo dela Vela Sicilia, the crew is supervised by coaches from both clubs. The project is part of the policy of the YCM’s training centre, La Belle Classe Academy, which teaches yachting professionals and supports new vocations through its Sailing department.

Age 14-22, they will be supervised by two coaches from the two clubs, the goal being to initiate them into the thrills of offshore racing. The project is part of the policy of the YCM’s training center La Belle Classe Academy, which teaches yachting professionals and supports new vocations through its Sailing department.

“This project, which strengthens ties we have with the Yacht Club de Monaco, aims to offer our young people, who have stopped racing to study or for other reasons, the opportunity to get back on the water and experience the magic of offshore racing,”explains Agostino Randazzo, Circolo della Vela Sicilia President. “In this first phase of the project, we are not interested in the results, but the educational aspect so they develop and become good sailors, not only racers. Sailing on the high seas is a school for life, which teaches strong values like respect, surpassing yourself and awareness of the need to take care of the sea and the planet in general.”

The YCM is also represented by Andreas Feichtinger on the Sun Fast Lungta Mtaic.

The Prize Ceremony will be held at the Yacht Club de Monaco on Sunday August 26, 2018 at 20:00. The winner in corrected time will receive the Angelo Randazzo Trophy, and the first to cross the line in real time the Giuseppe Tasca d’Almerita Trophy, born of Count Giuseppe’s love for the sport of sailing, and who was a founding member of the Circolo della Vela Sicilia ain 1933.

“Thought is the wind, knowledge the sail, and mankind the vessel.”August Hare