On Thursday, November 22, 2018, the Principality of Monaco hosted NASA’s legends from the January 1986 Columbia Space Shuttle mission, to mark the agency’s 60th anniversary, a program held under the high patronage of H.S.H. Prince Albert II of Monaco, from an initiative led by H.E. Maguy Maccario Doyle, Ambassador of Monaco to the United States and Canada.

A Forum, moderated by Mesut Ciceker, Director of EMEA for Lockheed Martin Space, took place at the Rainier III Auditorium in the morning where members of the press were able to partake with the former astronauts.The program continued in the evening in the presence of Prince Albert II, with the special screening of the Discovery documentary Above and Beyond: NASA’s Journey to Tomorrow by Rory Kennedy, Academy Award nominee and Emmy Award filmmaker. Rory Kennedy is the youngest child of U.S. Senator Robert Kennedy and Ethel Kennedy, born six months after her father was assassinated on June 6, 1968. Her cousin John F. Kennedy junior, his wife, and his sister-in-law were flying to attend her wedding when they died in a plane crash.

Above and Beyond: NASA’s Journey to Tomorrow – Official trailer

As depicted in the documentary, NASA is committed to working on developing systems and capabilities required to explore beyond low-Earth orbit, including destinations such as translunar space, near-Earth asteroids and eventually Mars. The International Space Station is a laboratory for human health, biological and materials research, and will be used as a testing structure and will serve as modus operandi for future long duration expeditions beyond where men has been before. The use of Robotics continues to help find answers and gather scientific information, but it is the combination of both human and robotic know-how, will certainly increase our ability to dig up new knowledge and understanding of the universe at large.

As a federal agency, NASA receives its funding from the annual federal budget passed by the United States Congress. According to the Office of Management and Budget and the Air Force Almanac, when measure in real terms, adjusted for inflation in today’s current-value dollars, the total cumulative figure to date would equal US Dollars 1.32 trillion, or an average of US Dollars 22.03 billion per year over its sixty-year history.

These are indeed quite large sums of money, but after listening attentively to the former astronauts, it became clear to me that human space exploration helps us to confront fundamental questions about our position in the vast universe, spurs innovation, teaches us about our ecosystem, thus creating awareness on the urgent need to protect it, inspires young generations, and help encourage peaceful connections with other nations. Instead of questioning how much is spent on exploration, we should raise objections on how much is spent in waging unnecessary wars around the world, and in our quest for enduring peace we would save innocent lives.

Pioneers & Innovators Of Our Time

The prestigious panelists, some of whom made the trip to the Principality, and chose to be here on Thanksgiving day away from their families, included crew from the January 1986 Columbia Space Shuttle mission and one of NASA’s pioneering women astronauts, as well as Guy Beutelschies, Vice President Lockheed Martin Corporation, Commercial and Civil Space, and Dr. Ilhami Aygun, president and CEO of SSI-MonacoSat. 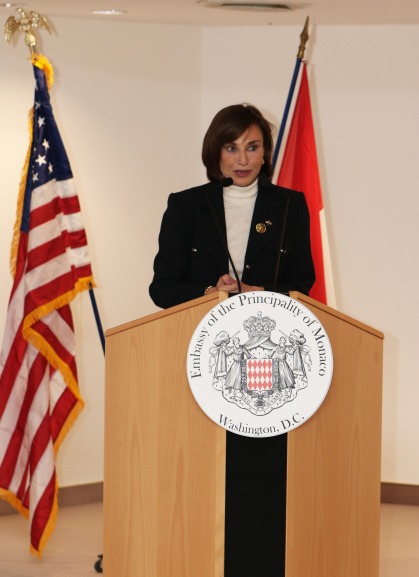 Maguy Maccario Doyle, Ambassador ob Monaco to the US and Canada @MonacoMediax

Panelists including NASA’s legends from the US space shuttle program, Monaco 2018 @CelinaLafuentedeLavotha

Buzz Aldrin, one of the first men who set foot on the Moon on July 1969 together with Neil Armstrong, a memorable epic, was also in Monaco, together with other highly respected NASA alumni  included French astronauts Patrick Baudry and Jean-Francois Clervoy. (Photo: Buzz Aldrin while being interviewed by Monaco Info @Monaco Mediax)

Both during the Forum in the morning and the interactive discussion that followed the documentary screening zeroed in on the subject of air and space exploration with an emphasis on the importance of international cooperation.

The day after on Friday, November 23 the panelists met with Monegasques students for a very interesting and dynamic interactive discussion. 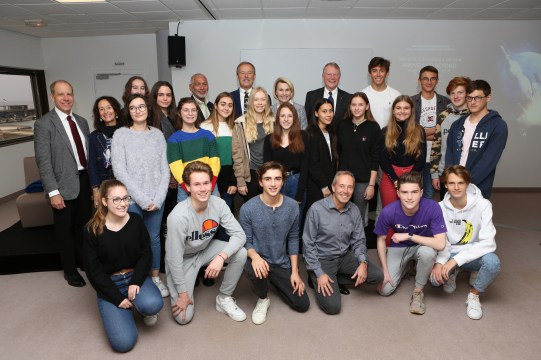 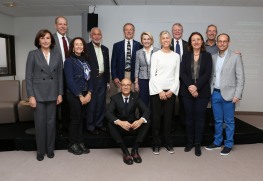 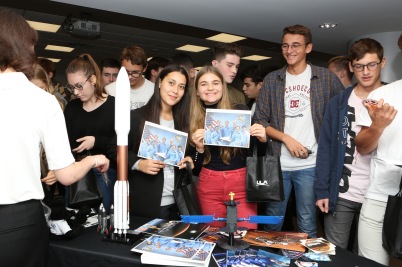 Pioneers and Innovators of our time meeting the students on November 23, 2018 @Monaco Mediax

Monaco reaching for the stars

The event in the Principality was meant to attract the attention of the public and the young generation on space exploration and its opportunities, both for research for the protection of our ecosystem and our life in the planet, and ignite their interest.

Monaco launched its own satellite MonacoSat, and soon a second one will follow, and at least one space on board the spatial station will be given to one or more residents or citizens of the Principality. Dr. Ilhami Aygun, CEO of SSI Monaco, signed an agreement between Axiom Space and SSI Monaco. (Photo insert: Dr. Ilhami Aygun and Guy Beutelschies of Lockheed Martin @Monaco Mediax)

Axiom will be the constructor of the first private spatial station, to be built after the International Space Station, to which it will be first attached to, and later separated from. The agreement comprises a long term study of spatial tourism and the possibility to install in the future a Monaco Space Module, and select and train local astronauts following the NASA’s norms, to engage in manned-flights and spatial research. From now to 2020 there will be a person from Monaco, who will be selected to go into space, after a thorough training equivalent to the one received by NASA’s astronauts.

“It suddenly struck me that that tiny pea, pretty and blue, was the Earth. I put up my thumb and shut one eye, and my thumb blotted out the planet Earth. I didn’t feel like a giant. I felt very, very small.” Neil Armstrong